INTRODUCTION: John and Clarissa West of New York and Iowa

John West was a pioneer of Solon, Iowa. He was born in New York in 1797 according to census data. Research has not yet revealed his parents or specific birthplace. The same is true for his wife Clarissa. No evidence of their marriage been found. Spurious claims posted in several 'family trees' at Ancestry.com purport that John West married Clarissa Chiles in New York in 1822--but provide no documentation of such marriage. (See 2017 update )

Orson and Clarissa may have come to Solon as part of a group migration from New York or northeast Ohio. They came with at least one son, Orson, and a daughter, Julianne/Julia Ann. (See 2017 update.)

Census and other records of Johnson County between 1840 and 1850 suggest that another family was living with John and Clarissa West. Possibly John or Clarissa's father was in the household --or John's son-in-law, Archibald Blain. Histories mention that John and his wife were charter members of the Methodist Episcopal Church of Solon. (Future research may reveal that Clarissa and John's ancestors are related to the Parks, Cannons, Stiles, Pratts, Browns, Gowers, Blains, McGrew, McCune or Adams.)

Clarissa apparently died between 1850 and 1853 although neither her death nor burial record survived. John then married Hannah Hill in 1853. It is not clear whether "Mr. and Mrs. West, charter members of the Methodist Episcopal Church," refers to John and Clarissa or John and Hannah. The church was probably established in the 1840s when Clarissa was still alive, but the structure was not built until 1855 at which time John was married to Hannah.

2017 update: Recent findings show that John and Clarissa West also had a daughter named "Julia Ann," born in 1825 in New York. Julia married Archibald Worley Blain in Solon in 1839. Archibald Blain was not listed in the 1840 U.S. Census for Solon, so it is possible that he and his wife Julia Ann and their family were the additional people living in the household of John West in the 1840 census.
(Please see discussion of details about Julia West Blain.)

John West is mentioned in histories of Johnson County as the partner of Hamilton H. Kerr. Together they hired Cyrus Sanders in October 1840 to lay out eighty acres of Big Grove Township for the town of Solon. Although John platted the town of "Solon" he did not record title to any of the town land. Johnson County land sales were sold out of the Iowa City Land Office after the U.S. Treaty of 1832 which acquired the lands of the Sac and Fox Indians as a result of the Blackhawk War.Big Grove township was part of the Blackhawk purchase of 1832--land ceded to Johnson County from the Sac and Fox people. Johnson County formed in 1837. The first settlers came in 1838. John was appointed a director to cut a road from Solon to Iowa City in 1842. John later acquired property in Newport Township north of Big Grove where he died in 1861.

Orson West and Catherine Griffith may have met in Big Grove Township, Johnson County, which is located in the eastern tier of Iowa. They each came with their parents to this region, Orson about 1838 at age 11. Their families may have met earlier in eastern Ohio and migrated together to Iowa. Catherine went by the name "Kate". (G2)

Both Orson and Kate acquired deeds to farm land in Johnson County about 1850. Orson and Kate disposed of their land and eventually moved to Illinois and/or Missouri. Between 1850 and 1860 Orson acquired $3,000 in assets while Kate's father and brother acquired $47,000 between them. No record of any inheritance has been found. However the photo of Orson,(right) taken as a young man in San Francisco, suggesets that they went together to the California gold rush and made a substantial money. No record of a gold strike has been found. It seems likely that Orson made money in the cattle trade in San Francisco. 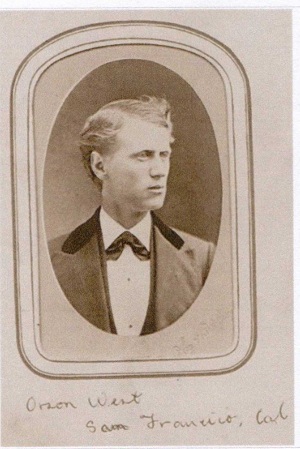 Since Orson later became a stock dealer, it is possible he learned the trade from some of the first stock raisers of Solon, Iowa. Orson and Catherine moved frequently between Missouri and Illinois. This movement might be attributed to the Civil War. Missouri was a Union state with strong Confederate sympathies. Kansas City and the region of southern Missouri became a dangerous place. Kansas Jayhawker abolitionists fought Missouri Bushwacker Confederates in the border between Kansas and Missouri. Illinois was a Union state and would have been relatively safe. Quincy, Illinois was a stop on the Underground Railroad.

Orson and Kate Griffith West raised a family of seven children--four boys and three girls. Yet they produced no grandchildren who survived to adulthood--except through their son Charles. Nevertheless the West line died out with Charles. Charles sired 2 sons and 2 daughters. Only one daughter produced offspring, but they do not further the DNA investigation of the male line. Neither of the two sons produced any known male heirs--only daughters.

Kate apparently died in Quincy, where Orson purchased a burial plot in 1879 but no tombstone was found for Kate. 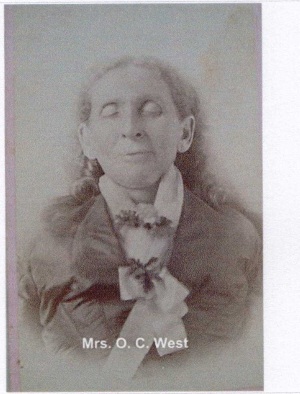 
CHILDREN OF ORSON AND KATE WEST: 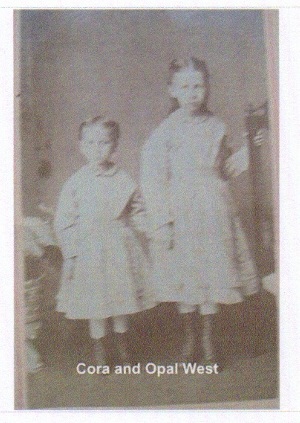 About 1880 Orson and his children returned to Kansas City. In the mid 1890's Orson and several of his children went west first to Colorado and then to Napa, California.

Orson died in a tragic accident when he fell down the elevator shaft of a San Francisco high-rise named the Phelan Building in 1901. The coroner's jury found that the accident was caused by a nine-year-old boy playing with the controls. The boy's name was Redmond Johnson, the son of a clerk who worked in the building.

The images below show the original news report (right) and the later news report on the involvement of Redmond Johnson (left) and the Coroner's Report (below).
For transcript of the articles see the Obituary PDF File.

Based on the birth place of each child as indicated in the census, and upon subsequent residence as shown in city directories, the following approximates the family's movement: 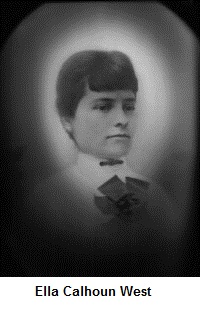 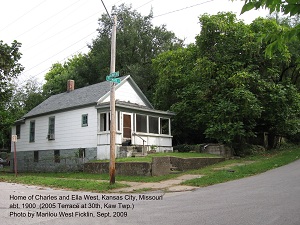 Charles and Ella went to Texas briefly. Ella returned to Missouri to visit her father but during her visit her child, Cora Verlinda, died. Ella summoned Charles back to Missouri. The couple did not return to Texas but remained in Kansas City, MO the rest of their lives. The question remains: did Charles and Ella have kin in Texas? If so whose kin? 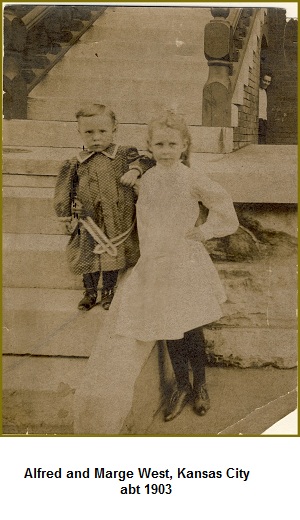 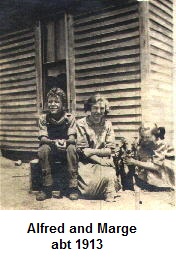 Ella died of kidney failure in 1912. Her son, Fred, married in 1913, and her daughter, Marge, married in 1915. Charles, remarried in 1917. About that time the youngest son, Alfred--still a teenager--left home, possibly in anger at his father (according to his own account). Charles died in 1932. Charles and Ella are buried together at Mt. Washington Cemetery, Independence, MO. 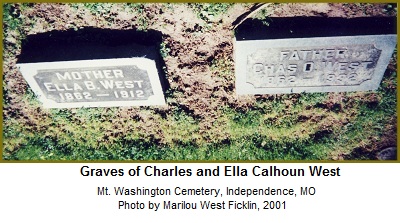 According to Alfred, he lived as an orphan teen-ager with his sister, Marjorie. His 1915 diploma indicates he finished "Greenwood School"--probably eighth grade. The last academic record in Alfred's personal mementos showed he completed one additional year in 1916--probably 9th grade at age 15 1/2. Family oral history suggestes he then left Kansas City to follow the wheat harvest to Oklahoma, Nebraska and Kansas. In winters he returned to Kansas City amd worked in the Cudahy Slaughterhouse. In 1919, about age 18 he followed the harvest to Cupar, Saskatchewan, Canada and then to Cumberland House where he worked for T. Eatons selling traps and rifles to trading posts. He befriended a trapper and began trapping for profit. They lived in mud huts on the ice, eating muskrat and selling the pelts. The following spring he moved to Edmonton, Alberta and then to Vancouver, British Columbia. He turned 19 in September 1920 and made his way down and across the southwest working on the railroad and as a ranch hand in Texas and New Mexico.

By 1921 he had reached southern California and worked in Hollywood films. Movie

By 1922 he had given up the movies and moved to San Francisco where he went to work for Southern Pacific Railroad Company. He married Jewel Herr 29 Dec 1926 in San Francisco, CA. 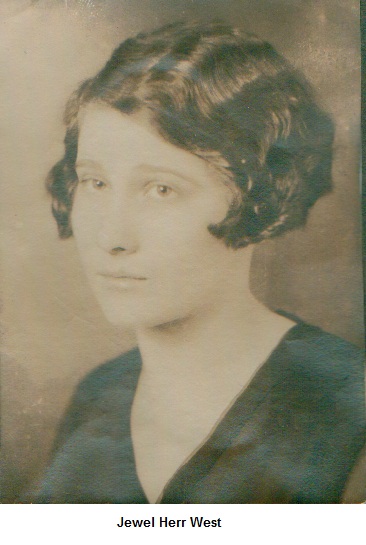 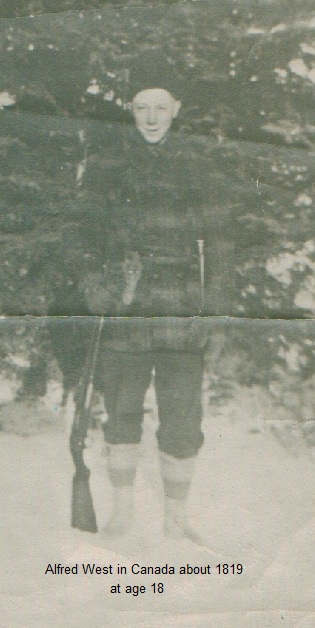 From letters written to Alfred by his father (Charles), sister (Marge), and brother (Fred), it appears that the Wests not only stayed in contact with Alfred, but they also stayed in contact with his mother's cousins in Stanley, Kansas well into the 1920's. Fred and Marge remained in Kansas City into adulthood. Alfred's father Charles died in 1932. Marjorie, Alfred's sister, married Walter Kruse and stayed in the Midwest--mostly in Ohio and Missouri. Alfred's brother, Fred, moved to Southern California and became a salesman for "Pablum" baby food--but maintained a side business --or avocation--in "writing."

Marge and her husband, Walter Kruse, had three children one of whom, Richard, served in WWII at the invasion of Normandy. Walter and Marge lived at various times in Kansas City and Cleveland. Walter worked for the Chesapeake and Ohio Railroad.

Fred and his wife Leota Harriss moved to southern California in the 1930s and had one daughter, Dorothy Jean (born 29 July 1915). Dorothy Jean married 1 Feb 1936 at about age 20 in Los Angeles to Tommy Burk and had two children, Larry and Jaydean. 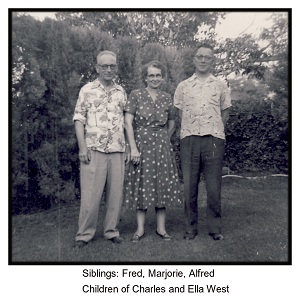 B. Vital and Cemetery

1. Rootsweb World Connect, "The Eugene and Judith Whorton Henderson Family Tree":Hannah Stout ID145909 and John West ID 129666: states that Hannah and John West are buried at Sandtown Cemetery, Liberty Twp, near Hills, IA. Burial records to confirm this have not yet been found.

2. Mementos of Mrs. Henrietta Pattison of Quincy IL, mother-in-law of Pleasant Morris West who married her daughter Hettie Emeline. Includes letter written by Kate West and photos of Orson and Kate West and daughters Cora and Opal. These items are posted with the Pattison Family Tree at Ancestry.com and copies were provided by the author of the family tree, "hortonbhwy69".